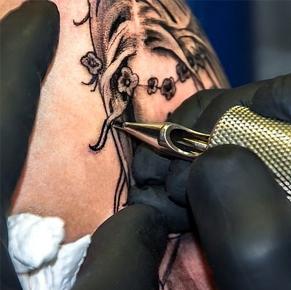 We now have the PiQ04 picosecond laser in the clinic, being used for pigmentation and tattoo removal. This laser has four different wavelengths, unlike other lasers, which may only have one or two wavelengths. This makes it particularly good for removing colourful tattoos off all skin types.

Tattoo ink removal – 40 per cent less treatments, all colours removed
The PiQ04 laser system can tackle more tattoo inks than any other picosecond laser, by a large margin. Users have reported less treatments are required for removing tattoos, sometimes by up to 40 per cent – out of the 10 sessions it would take previously, this means only six sessions to completely remove a tattoo. This is significant when talking about the costs in both time and money required to remove a tattoo. So, the PiQ04 gets better results due to being able to tackle more colours, all in far less time. We love this laser – it excels in tattoo and pigmentation removal.

The PiQ04 can remove all tattoo ink colours, traumatic tattoos, amateur tattoos, and pigmentation marks. The beauty of this laser is that the four wavelengths mean more colours can be targeted, while other lasers may only have one or two wavelengths, reducing their ability to target all colours. For this reason, you may have needed several lasers to do the job, or just end up with an incompletely removed tattoo.

Our PiQ04 laser has four different wavelengths to target all tattoo ink colours, on all skin tones. Here’s how:

Book your tattoo or pigmentation removal appointment today.
Contact us