Is HIFU safe for the face?

Is HIFU safe for the face?

High-intensity focused ultrasound (HIFU) is considered a very safe anti-ageing treatment for the face. HIFU is a cosmetic treatment that boosts collagen production and results in tightening deep beneath the skin to provide a visible lift to facial skin.

A HIFU facial at ENRICH is performed by one of our expert practitioners using the Ultraformer III, a safe, state-of-the-art medical ultrasound device. We use safe HIFU on the face to achieve non-invasive facial tissue lifting, and to improve skin texture and tone.

One of our newer treatment options for non-surgical skin tightening, Ultraformer HIFU treatments result in an unmatched boost for sagging facial tissue. There are few short-lived side-effects from safe HIFU facial treatments in some people.

You can expect is some minor signs of inflammation at first, which means the treatment has worked. Deeper layers of collagen fibres are tightened and collagen production is increased. The treatment results become much clearer at the three-month mark, since collagen takes time to be naturally be produced.

Safety of the Ultraformer (HIFU) facials

There aren’t many negatives to Ultraformer (HIFU) facial treatments – the safety profile is excellent, with the results speaking for themselves. You can expect a few side-effects immediately after a treatment, which dissipate within 24-48 hours. You may experience:

Almost anyone can benefit from safe Ultrafomer (HIFU) face treatments at ENRICH, but there are some people who cannot be treated due to the nature of this high-tech skin treatment. There are no barriers based on gender, skin colour, skin type or age, however those with ageing skin tend to see the most obvious results.

People who can’t get HIFU skin treatments include anyone with an active skin infection, open wounds or visible acne lesions in the treatment area. People with pacemakers or other electronic implants are not able to undergo this type of treatment, and those who are pregnant are also excluded.

Results can be less visible in those with extensive sun damage and people who smoke.

If you aren’t able to naturally heal in a reasonable timeframe, HIFU may not be the best treatment for you. The skin is required to perform at a basic level to repair and regenerate.

What does HIFU do to the skin? 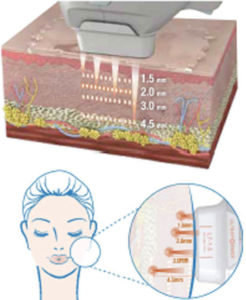 HIFU treatments work by applying high-energy ultrasound energy underneath the skin. The ultrasound works on deeper levels of skin and collagen, without harming other tissue or the outer skin. This is one of the reasons HIFU treatments are so effective: they go deep, leaving untreated skin untouched. This is in comparison to other anti-ageing skin treatments such as laser resurfacing or chemical peels, which act on the skin’s surface.

The Ultraformer has four multi-depth cartridges directly transfer ultrasound energy into multiple layers of the face to trigger collagen renewal for a tighter, younger complexion.

Can Ultraformer HIFU treatments be performed on other areas of the body?

HIFU treatments can be applied anywhere on the body, with some outstanding results on cellulite, collagen production and skin tightening on the upper arms, thighs, knees, and abdomen. HIFU treatments work in exactly the same way wherever they are applied, tightening collagen and muscle for the overall tighter appearance of skin.

Loose skin after significant weight loss can be non-surgically tightened with HIFU treatments, especially for those who are not keen for the surgical removal of excess skin.

How often will I need Ultraformer (HIFU) face treatments?

Most people can start with one Ultraformer HIFU treatment to start with, however, in some cases, two may be performed three or four months apart. For maintenance, treatments may be scheduled annually, however, the frequency will be determined by your cosmetic specialist. At ENRICh we have the mantra that 1 +1 =3, so two treatments reasonable close together will give you the benefit of three.

The Ultraformer ( HIFU) treatment is one of those treatments that you tend to see the full benefit  months up the track. It is the nature of the treatment and the depth in which the ultrasound energy goes into the layers of the skin.

What does research say about the safety of HIFU facial treatments? 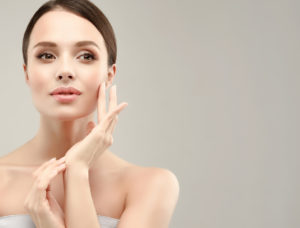 A 2015 study (Park et al) published in the Annals of Dermatology looked into how well the HIFU treatments worked and how satisfied the patients were after their treatments. The study was conducted on 20 Korean people with facial wrinkles and laxity (sagging) after just one treatment.

The study employed two independent clinicians to evaluate the results across seven areas of the face using before and after photos. Photos were taken once before the treatment, then immediately after, and at the three- and six-month marks.

Both the patients and the doctors had similar views on how well the treatment worked, with visible improvements to facial skin tightness noted. Most patients were very satisfied, particularly at the three-month mark.

The researchers observed that the most noticeable improvements were seen around the eyes, jawline and cheeks. The only adverse effects noted were redness and swelling in six of the 20 patients, and two cases of blood spots and bruising. These effects were noted as mild and short-lived.

A 2016 study (Zandvakili et al) saw similar overall results across 25 Iranian patients. In this case, most physicians and patients rated the treatment results as ‘normal’ or ‘good’, with just one person saying the treatment was ‘weak’. The researchers noted that HIFU was a safe and effective treatment for facial skin tightening, reducing the appearance of facial wrinkles, and improving skin tone and facial contours.

A 2012 study (Alster and Tanzi) published by the American Society for Dermatologic Surgery showed that HIFU is effective and safe to use for improving skin texture and contours on the knees, inner thighs and upper arms.

We are Ultraformer (HIFU) skin-tightening experts.
Contact our friendly staff for an appointment