We use liquid nitrogen to freeze off skin spots in a process known as cryotherapy. In liquid form, nitrogen gas is very cold, sitting at -200°C. Superficial skin cells like warts, moles and sunspots can be frozen off and destroyed without damaging nearby skin.

One of the major benefits of cryotherapy is that it seldom leaves scarring. We use liquid nitrogen every day at our clinic for a wide range of skin growths, as treatments are quick with minimal discomfort and easy healing.

It’s important to have an experienced dermatologist performing cryotherapy to ensure the end result is smooth, clear skin. 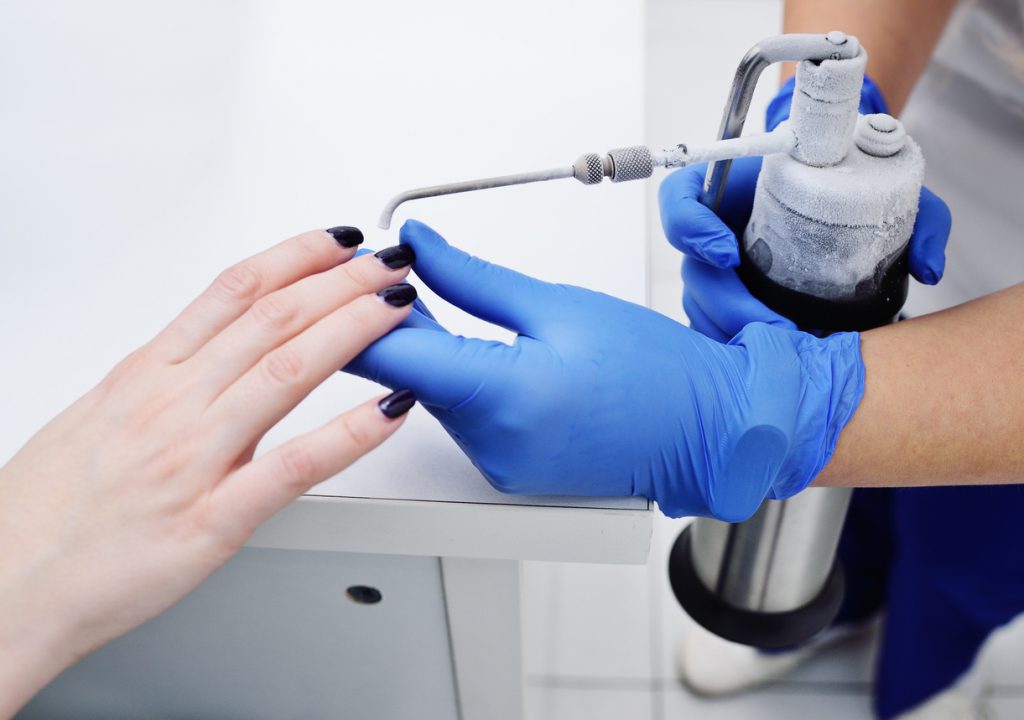 What is liquid nitrogen used for?

A dermatologist uses liquid nitrogen treatments for skin growths and spots, including:

Usually, cryotherapy will cause mild stinging during treatment as the growth or spot is frozen and then thaws. However, discomfort is mild and lasts about five minutes. Most patients find cryotherapy to be a quick, tolerable procedure.

What happens to the spot after treatment?

Later in the day, 1-2 hours from treatment, the treatment site becomes a little swollen and red. At some stage, the treated growth will form a crust, scab or blister, which will fall off by itself over the coming two weeks, taking the growth with it. Then, finally, new, healthy skin emerges underneath the blister. 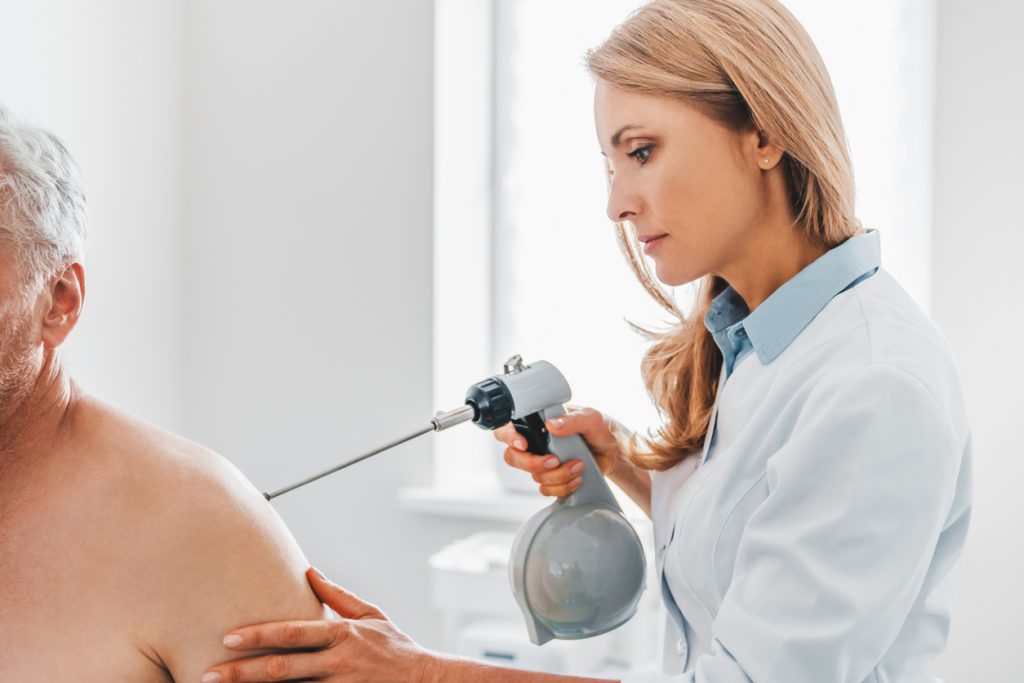 How to prepare for cryotherapy

There is no preparation for cryotherapy, except perhaps removing makeup, creams, rings, watches or powders from the treatment area. Then, your doctor will clean the area to sterilise the skin and prepare you for treatment.

How to support quick healing

There are some tips on how to help your liquid-nitrogen treated area heal faster. It is advisable to allow the blistering, crusting and scabbing process to run its course, allowing the healthy skin underneath to form to avoid visible scarring.

Apply an ointment such as Vaseline twice per day, and cover with a Band-Aid if desired to protect the scab. In the event of bleeding, hold gauze or a tissue firmly onto the wound until bleeding stops.

Avoid putting anything onto the blister or scab as it heals, for example, rings or makeup, potions or lotions, but do feel free to apply the protective ointment as often as it needs it.

Don’t pop the blister that will form, as this could introduce infection and interrupt healing. Clear fluid may leak out of the blister, which can be absorbed using tissue.

Does cryotherapy leave a scar?

Liquid nitrogen treatments don’t typically leave a scar, but they may leave a mark of a different colour on the skin (usually whiter). This colour change usually resolves over time but in some cases persists. This colour change is not dangerous and doesn’t mean your growth will come back, but depending on the location, it may be undesirable.

This colour mismatch may be more pronounced for deeper treatments since more collagen is required to repair the patch. Cryotherapy may require greater consideration on darker skin tones, as it leaves this white mark that may not return to its normal skin tone even in time.

At ENRICH Clinic in Melbourne, we often use cryotherapy on precancerous growths such as actinic keratoses, though less often for skin cancers. We may use cryotherapy to treat small squamous cell carcinoma in situ.

There are only certain circumstances where liquid nitrogen for skin cancer is appropriate, for example:

In some cases, when liquid nitrogen is the treatment of choice in skin cancers, cancer returns after treatment. However, one study found that cryotherapy had a cure rate of 99 out of 100 people.

Suppose the growth requires a biopsy to test for cancers. In that case, it is not appropriate to remove it using cryotherapy as this method will destroy the growth, removing the possibility of testing it. Instead, excision is more beneficial for biopsy.

Some moles can be frozen off using liquid nitrogen, but it will depend on how deep the roots or blood supply of the mole are. It might be more effective to cut the mole out to prevent it from growing back.

The process is the same for other skin growths like moles, and we can safely and effectively remove many types of pigmentation using cryotherapy.

Other options for removing spots at the dermatologist

At ENRICH Clinic, we have many methods for removing spots, depending on the nature and location. We work with patients experiencing pigmentation issues such as sunspots, moles and freckles, clearing or fading spots with lasers, excision, freezing or burning, as per the spot’s requirements.

We have some of the best specialist dermatologists in Australia who can clear your skin effectively, so book in for a consultation to see how we can help you with your skin concerns.