Tumescent liposuction is the gold standard in liposuction techniques, regarded globally as the technique that gets the best results time and time again.

Why is tumescent liposuction ideal for optimal results?

We do not perform Vaser or laser liposuction at ENRICH – we perform the gold standard tumescent technique, with over 25 years’ experience. Dr Rich has performed over 2,000 liposuction procedures.

Tumescent liposuction excels at treating all areas of the body 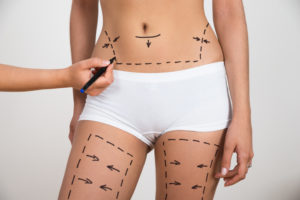 Vaser liposuction is performed using a special probe that emits ultrasonic waves from both the end and the sides uniformly. The probe is inserted just under the skin into the treatment area and moved gently around to treat the fat cells.

The ultrasonic waves (vibrations) and heat combines the fat cells with a special saline solution that is injected into the area prior to treatment. This emulsifies the fat, which means the fat and the fluid become a liquid mixture, which is then suctioned out of the treatment area.

Fat cells removed during vaser liposuction can be used on other areas of the body (breasts, buttocks) using a fat transfer or fat grafting technique. This is also possible with regular liposuction techniques.

Vaser liposuction and tumescent liposuction are both very good for treating fat in fibrous areas of the body, such as the upper abdomen and back, and excellent for removing large volumes of fat and deeper fat. Vaser tends to be more expensive than laser-assisted or regular liposuction. Vaser liposuction may be performed under general or local anaesthetic. 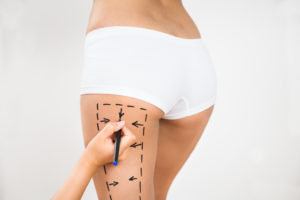 Laser liposuction uses a thermal laser beam to destroy fat cells, and unlike vaser, bursts the cells, emptying the contents – ‘liquefying’ fat. This liquid contents is suctioned away at the same time as the laser is applied. With laser-assisted liposuction, the laser beam is only emitted from the end of the probe, not the sides.

Blood vessels inside the treatment area are cauterised by the laser beam, which reduces bleeding. The special tumescent fluid injected into the treatment area also contains lidocaine, which not only numbs the area fully, but acts to seal off blood vessels. This means very limited bruising and bleeding, resulting in quick recovery times.

There is a greater risk of burns using laser liposuction compared with vaser liposuction, however in the wrong hands, the vaser probe has a history of burns too. Laser techniques are not quite as useful when treating fibrous areas of the body, but are useful for smaller areas. Laser liposuction may be performed under general or local anaesthetic.

What is the difference between vaser lipo and tumescent liposuction?

The processes are very similar between vaser, laser, and tumescent liposuction overall, but Vaser and laser may come with extra risks. The extra probe with the energy beam (ultrasound or laser beam) is useful in some circumstances but has little to do with a successful outcome. An experienced, expert liposuction practitioner is always your best bet for excellent results.

Read more on the science behind tumescent liposuction.

What’s the difference between Smartlipo and liposuction?

As above, Smartlipo (laser-assisted liposuction) and tumescent liposuction are different only in that with Smartlipo; a laser is used to break up the fat before it is suctioned out.